13 replies to this topic

Kinda like my What do you want from Zelda thread, only taking it to a different medium. A LoZ movie is not a new topic but it's one you can always revisit from time to time. What made me think of bringing it up again was April Fools and how IGN pranked us into thinking there was a real Zelda movie. Okay, maybe most of us new it was fake right off the bat but it did get people thinking that maybe, just maybe, a zelda movie might not that crazy of an idea after all. Rewind things even further, to circa the late 90's/early00's, if you were to ask me if a Zelda movie was possible, I'd say you were off your rocker. Nowadays, I'm more opened to the idea. If given the right director, right cast, right writers, it could, theoretically be done. In either case, there's nothing wrong with thinking about it.

So I ask you, if you had your way, how would you do a Zelda movie.

Here is my dream Zelda movie:

Director-Guillermo del Toro. This one's easy. He's perfect for the job! He has a could track record with dark-fantasies such as Pan's Labyrinth and Hell Boy. If anyone can make a "dark" Zelda, it's him. He's even expressed an interest to take on a Zelda movie. He usually incorporates war themes into his work, so maybe a story centering around the unification war prior to OoT would fit him nicely. A live action film would be the perfect opportunity to show Hyrule actually at war, whether with other countries or a civil war from within. We know Hyrule's past is steeped in war. Let's actually see it. Personally, I would do the original LoZ story, taking it to it's barest elements, and reimagine it as a Hyrule as steampunk 1940's European styled country that soon becomes a battleground for it's own War World when evil starts taking over Hyrule from within it's own people, as the people, swayed possibly by Ganon's influence, turn against the Triforce-weilding monarchy.

Cast- This part's a little tougher. Who could play such iconic leads as Link and Zelda? Well that's part of the fun. Here's what I've come with. 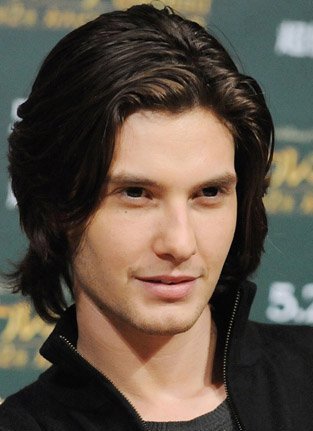 Ben Barnes as Link. He's kinda... oldish now but he pulls off the classic Link look from OoT really well and his acting comes close how I'd imagine Link personally if he actually had a speaking role. He can pull off playing young and innocuous while being at the same time being incredibly fierce and brave. Alternatively, Jason Rathbone (Twilight) as my second choice for a more non-traditional, more emo-looking Link. Jeremy Sumpter (Peter Pan) is another candidate Zelda is little tougher. My gut reaction is to cast Zelda Williams, since she was literally named after the princess. But does she have the acting chops to actually portray her namesake? The only thing I've seen her in is If the World Were Mine and she didn't have all that big a role. Alternatively, I'd cast Emily Browning. Judging by her past roles movies like A Series of Unfortunate Events and Suckerpunch, I think she would fit in a darker, weird, and twisted version of LoZ. For a lesser known actress I'd go with Rachel Hurd Wood (Peter Pan.).

Morena Baccarin (Visitors) as a younger Impa. She kinda reminds me of Impa from Skyward Sword and she has a Stoic, Skeikah-like presence about her.

Robin Williams as the King of Hyrule if his daughter is palying Zelda. Only seems fitting. He even looks the part with the beard and all. Not sure if he'd fit a del Toro verson of Zelda but who knows! Alternatively, I'd cast Edward James Olmos, only beacuse I love him as authority figures put under immense pressure. If Hyrule is at war, he'd be the man to lead the charge.

Ron Perlman as Ganon. I mean c'mon, as Hell Boy he already had the look and build as Ganon. Alternatively, Oded Fehr from the Mummy Returns would fit a human Ganondorf.

I agree that it would be interesting to see, if they pull it off right. I also agree with the the storyline, a prequel that will lead into OOT.

Link: Orlando Bloom - since he already played an elven character in the Lord of the Rings (I like the way he looks in blond hair)
Zelda: Maybe Uma Thruman
Impa: I never thought about Morena Baccarin, but seeing the picture I would have to agree with you.
Gannon: I would have to agree with you on Ron Perlman. He is a very talented and versital (?) actor
Voice of the Deku Tree: Sean Connery or Liam Neeson

Sean Connery as the Deku Tree would be the sole greatest thing ever. XD

I can never think of an appropriate cast for a LoZ movie, granted I've never actually tried too hard. Perhaps I'll come up with something later when I have more freetime/am more awake.

Edit: Okay, I've got it. I have come to the conclusion that there is no way they could do a serious LoZ movie without ruining it somehow, so the next best thing is to make into a ridiculous comedy.

Director: Mel Brooks: Who better than Mel Brooks to make a ridiculous comedy over just about anything. He would also play as the King of Hyrule.

Link: For the kind of movie I have in mind,the choice is obvious, Will Smith. Even though he's getting older now, I think he could pull off this role perfectly in his younger years.

Zelda: To be honest, I'm not sure who to cast as Zelda. My only criteria is a strong lead female, who at least kicks Link's ass at some point in the movie.

Ganon: For his amazing villainous role as Lord Helmet in Space Balls, Rick Moranis is the obvious choice for Ganon. Glasses and all.

Voice actors: The only two I have in mind at the moment are Sean Connery as the Deku Tree, there's no way I could pass that up, and Queen Latifah as a sassy, condescending Navi.


Remember kids, if you can't do something right, take it down in flames.

Preferably one that didn't emulate Ocarina of Time like the many fan movies did.

We get it. That game was good. But it doesn't translate all that well into a movie.

Preferably one that didn't emulate Ocarina of Time like the many fan movies did.

We get it. That game was good. But it doesn't translate all that well into a movie.

So long as the actors were competent enough to do their roles correctly and without mediocrity then they can cast whoever they want. As far as the plot is concerned, I think the only approach is to make a unique story that could fix into a 2 hour window, possibly as a part one part 2 deal. If they were going to take things from the games directly, I would highly recommend they use A Link to the Past's plot, or perhaps use it as a resource.

I'd like to see a Zelda movie done that doesn't try to recreate any of the games. It'd be neat to see a whole new story that wouldn't have to try and stay true to a specific game.

It could still be different plot but some of the characters from OOT. .. Please no comedy for Zelda, it would just ruin it for me. A lot of great shows were made bad due to that genre. The Batman movies for one ... it took years before a better director came along to make them watchable/enjoyable again.

It all depends on the director how the movie will turn out. Peter Jackson would be a better choice since he has done a great job with the Lord of the Rings and now the Hobbit.

If you want Navi, then you could just get a child to do the lines.

Eddie Murphy and Mike Myers as everyone.

My country lay within a vast desert. When the sun rose into the sky, a burning wind punished my lands, searing the world. And when the moon climbed into the dark of night, a frigid gale pierced our homes. No matter when it came, the wind carried the same thing... Death.

But the winds that blew across the green fields of Hyrule brought something other than suffering and ruin.

I coveted that wind, I suppose.

It can only be called fate. ...That here. I would again gather the three with the crests. ...That I should lay my hand on that which grants the wishes of the beholder... That when power, wisdom, and courage come together, the gods would have no choice but to come down...

The power of the gods... The Triforce! He who touches it will have whatever he desires granted!

Already, the crest of wisdom is mine...

OMG ITS A SHINY PSYDUCK

Made by Studio Ghibli.

If we're gonna to take it down a comedy route, let's do it right.

Rupert Grint (Ron Weasley from Harry Potter) as Link. Especially if his performance anything like he was in Wild Target.

Felicia Day (The Guild, Dr. Horrible's Sing-Along-Blog) as Zelda. Not only is she cute as a button, she quirky and funny too.

Johnny Depp as Link's father figure/mentor/comic relief. A character much like Captian Linebeck.

I don't think I can top Christopher Walken as Ganondorf.... That's too funny. D:

I'm gonna echo what has been said and say I'd prefer a Zelda movie that tells it's own story rather than attempt to adapt a specfic game. Especially OoT. I wouldn't mind if they tried reimagine LoZ's story since it's pretty basic and has plenty of room to expand. Personally I'd say they should do what SS does. Technically it's a prequel to the series but it also successfully reimagines pretty much every game in the series at once. A Zelda movie should do that. It should be a homage to the series as a whole. I think fans would love that.

A movie story I came up with a long time ago:

In the land of Hyrule, the great King is dying. His reign is a Light that holds back the Darkness. But as he dies, that Light fades, and the things of evil begin seeping into the land. And with his death, there is no one standing in the way of Darkness to keep it from reaching the Triforce. Except one person: the King's heir. An evil man, wishing to lay claim to the throne, hatches a plot to kill the King's daughter, Princess Zelda, and resurrect the Demon Lord, but those loyal to her hide her behind the doors and traps of Great Temple to safeguard her against evil. With her death, and the line of Royal Blood broken, Evil will be able to have its way with her. But from a far away village, a boy comes who will come to be known as a Hero, one who will be able to open the seals of the Great Temple, save the Princess, and safeguard the Sacred Realm so that the Triforce can be claimed before it is tainted by evil.

Basically I wanted present all the elements of the Zelda games, but make sure that the spirit of the games carries over to movie format as well.

That sounds good. That might actually work. Like I said before, it all depends on the director.